If someone asked me why I make documentary movies, I would say: “Because it’s fun and I like it.” It is difficult to explain. You have to try it to feel it. It is true that even sometimes making a documentary is like masochism thing to do. Well, it can be boring and depressing, but addictive at the same time. You have to find ways to fund it, fix your deadline, do research. You should listen patiently while your subject is talking, watch some shoots so many times to make sure they fit into a story.

Sometimes in editing session, I break down and almost give up. The subjects in my movies are mostly farmers or fishermen that are not used to speak out their mind. Normally, when I ask questions, they will beat around the bush or tell a long and flat statement.
Because I have only few days to take pictures, I interview as many people as possible then compile their answer in editing session. While editing, I have to sit for hours for typing their answers. Then I should pick and construct some sentences that perhaps could form a story. It’s like constructing a puzzle when you have no idea how it shapes until you finish it. Sometimes it makes me feel like kicking someone. But in the last minutes while my editor and I are satisfied with the result, we give high five. Then, we are dreaming of making another movie.

Now, I am on the process of making my 6th movie. It started last year when Timur (my camera person) and I made a visual report about some farmers who finally received license to utilize the woods in the state forest. I submitted that story to Doc Net and they gave me opportunity to join their summer class on June 7-18 in Hanoi, Vietnam to develop my idea.

In the class, I met moviemakers from all over Southeast Asia. Our tutor was a Dutch moviemaker named Leonard Retel Helmrich. He’s the one that popularize single shoot cinema. The basic thing I learned about this filming style is you only focus on one person (or one thing). Then you capture that subject with their situation. You orbit that person and shoot it from a lot of angles so your audience see him/her as part of their environment. One thing that I notice is that there was no (or less) panning.

On our first day, Leonard showed us some tools he made to take some scenes. He said that making film is not about the expensive tools you used. The more important thing is that you knew about the plus and minus of your tools. Then, we watched Leonard’s movie ‘Position Among the Stars’. For that movie, he took more than 300 hours pictures and more than one year filming. OMG, I couldn’t imagine how depressing it is to sort out the scenes into less than 3 hours movie. Well, I started thinking that loving things you did is not enough. You have to work hard and master every bit of your work.

I’ve got an impression that Leonard made his movie perfectly. He always tried to find better ways to capture something. While making ‘Position Among The Star’ he spent the fund more than what he got. He said that he was almost broke when finishing that movie. That reminded me that when you did the best on your work, the rewards would follow. He got that by winning several international awards for that movie.

I know I am still far from that. While making movie (and doing other things), I always simplify. I use camera person because I’m lazy to learn how camera works. I also never learn how to edit a movie because it is easier for me to ask other person to help me than learning technical things. Here, I met some people that paid full attention on the things they did. There was EJ who helped me editing shoots for my poem class. He took every detail seriously. Even that it was my task, he worked harder than me. Wathanak practiced taking pictures as many as possible using single shoot cinema. He even took some shoots while we had lunch. Tricia always ensured herself that she had understood the lesson well before doing her job perfectly. On never thought she was too old to learn something new (or doing stupid things with us). Marc had sharp eyes and ears. Be careful if you were talking, when he was around. He had the potential to be a good stalker. He..he…

Back to single shoot cinema, while capturing his film, Leonard used a tool named steadywing. That helped the camera person handling the camera and reducing shakes while moving. Leonard told us that we could make it using water pipe. Then, he turned our class to carpentering session. We spent half day cutting pipes, sawing board, then assembling them. For most of us, this was our first handiwork. No wonder it turned out to be an amateur works. The steadywing we made was far from perfect. Some of the pipes were glued on the wrong part and most of the wings were not precise. But we had a lot of fun. Nga even had time to draw on the wings board. While doing that, we practiced single shoot cinema. All of us alternately took pictures using one camera. Wathanak and Lek were those who mostly enjoyed the part. They hang around the class and played with the camera.

We had some outdoor practice. One of them was at old quarter. That meant we could practice to shoot and shopped around or hangout in between. Well, was it a good or bad thing? I took some pictures from a painter, a snack seller, and a tailor. I chose them because I liked their colorful goods. Leonard showed me how to take a shoot. He was very…very close to the object. He also said that we had to avoid shooting people on their eye level. That would disturb them. At first, I thought it is cruel to take someone’s picture at that very close distance. I didn’t feel comfortable doing that because I didn’t like when someone took my picture so closely, either. But after some practice, I just realize that I took closer image.

We had a class to practice how to orbit. At first, Leonard used metronome to guide us how to walk. However, because some of us enjoyed the music, he let us playing some music while practicing. Suddenly our class was full of Maroon 5’s and Justin Bieber ‘s songs . We were dancing all day while our friends shoot us. Well, in this class we played a lot.

For our personal task, Leonard asked us to make short movie from a poem. I chose ’Dont Quit’ by Edgar A Guest.

This is the poem:
Don’t Quit

When things go wrong as they sometimes will,
When the road you’re trudging seems all up hill,
When the funds are low and the debts are high
And you want to smile, but you have to sigh,
When care is pressing you down a bit,
Rest if you must, but don’t you quit.
Life is queer with its twists and turns,
As every one of us sometimes learns,
And many a failure turns about
When he might have won had he stuck it out;
Don’t give up though the pace seems slow–
You may succeed with another blow,
Success is failure turned inside out–
The silver tint of the clouds of doubt,
And you never can tell how close you are,
It may be near when it seems so far;
So stick to the fight when you’re hardest hit–
It’s when things seem worst that you must not quit.
– Edgar A. Guest

I imagined the poem talked about someone who was dying because of severe disease, but still wanted to live because he/she wanted to see his or her children grow. But, it was difficult to find a subject on such a limited time. Then I hang out around the town randomly while taking pictures of moving objects. Thanks to Thu who accompanied me. In my opinion the poem is about keep on moving in order to stay alive. I do believe that to live is to open a pandora box. No matter how hard or sorrowful it is, you will be ok as long as you keep a little thing named hope. Thanks to Ivy who was very kind to lent me her camera. I left my handycam in Jogja because I thought the class would only discuss ideas.

On the last day, we made a video clip. Leonard picked R Kelly song‘I believe I Can Fly’ for our final task. Before the take, some of us talked about the story. Because there are a lot of directors (and heads too) we often changed the script. We finally decided to make it in a class. There were two people in our story, one dancer played by Thanh and one photographer played by Naw. They tried hard to be a dancer and photographer. But they failed and people mocked at them. In the end, they swapped their roles and it became a happy ending story. We used single shoot cinema to record it. The camera goes from one cinematographer to the other. We repeated the shoot 4 times because it was not easy to have many hands for a shoot. Some of us started complaining but we went on after seeing that Naw who had a bigger role was still full of spirit.

The summer class is over now. We are back to our ordinary life and maybe some of us have forgotten about the movie we proposed to make. Perhaps we have other things to do or give up with the project. I start to think that I want to have a movie with emotion in it. I want to tell the audience that it is not easy to grow a forest on a rocky land. I need longer time to execute that. Tomorrow, I’ll fly to Jakarta for an event. I’ll extend my stay to meet some people that could be helping me funding that film. There’re will be two answers only: yes or no. And I would like to have at least one yes. We’ll see later. 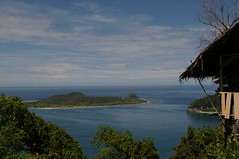